Honestly, full of curiosity but it definitely gives me a breather.
✖️ Facebook ✖️ Instagram ✖️ Whatsapp
Although I cheated on whatsapp when I have to call Bibik to video chat with Mum. Other than that, here I am back to basics with texting, emails and letters. Back to writing and journaling of which I used to love.
“Back to my first loves” he said.

My sincere apologies for unanswered messages on Whatsapp (im hardly on it) and social media. Texting me is the way to go.

Back to first loves, also meant for the love of libraries. If only, the State library was merely a walk away. The whole idea of immersing myself with a book; finding my little cosy corner in the library full of character which I feel is part of a good meditation on a Saturday morning. I knew Azura will agree with me on this one. 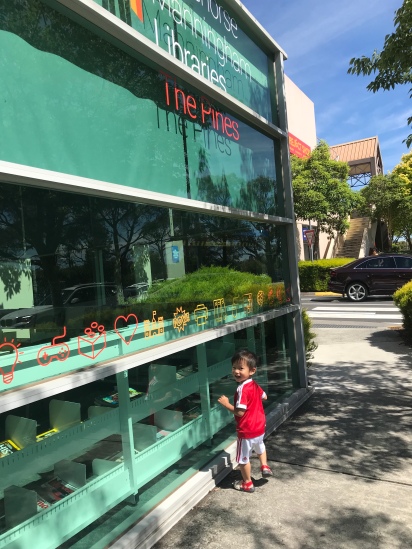 Ayden and Ali decided to come with me to the Library the other day, Ayden was happily glancing and hopping through the library and picking out picture books with cars and buses on its cover. And Mummy is thoroughly happy with her Marie Kondo‘s books that came in at the most apt timing! Also very excited to try out some kitchen experiments with Chrissy Teigen’s Cravings cookbook! 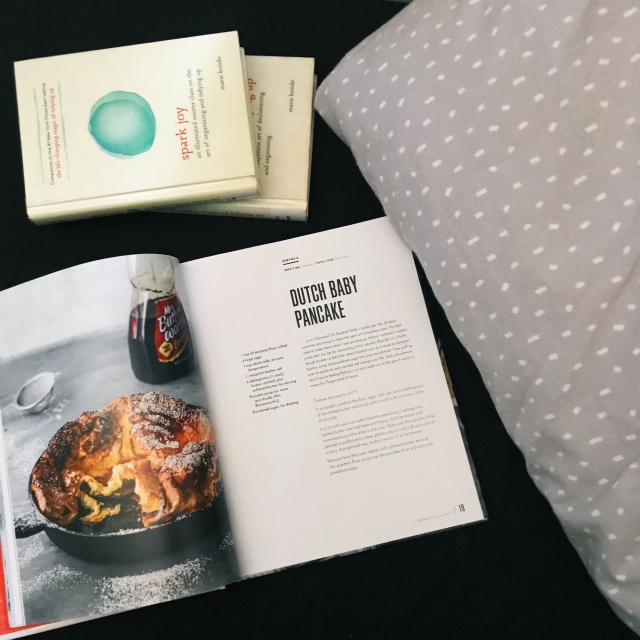 Marie Kondo’s Life-Changing Magic: A Journal – Spark Joy Every Day, is all about the KonMari method of decluttering and tidying. I am only halfway through the book, but acts of thanking each item before discarding them off, working through categories instead of places and most interestingly does the item sparks joy? If they are not, thank them and discard them. You’ll find it easier to discard them. I am quite a sentimental hoarder and find it quite effective using the KonMari method to declutter my clothes. With her method, folding is one of the highlights and the way to go. She can fold anything and everything. And using her method of folding too; you will learn to love folding in no time and find yourself maximising your wardrobe/drawer space! Can’t wait to finish reading her books and as you can see someone love it too! 😂 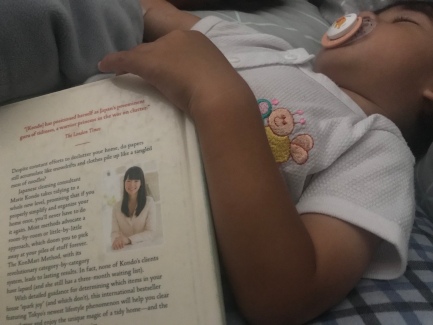 Ayden’s all time favourites are the Maisy books as well as Spots but these days anything with cars and buses really. And sometimes helicopters or aeroplanes too. Like any active toddlers, his attention span can for from 5mins to 0 in a second! Some mums are lucky enough to incorporate bed time storybook routine, for me, I’m just content if he sits with me reading a couple of books a day without any distractions. Our goals for 2018! 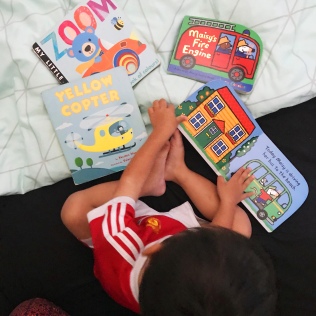 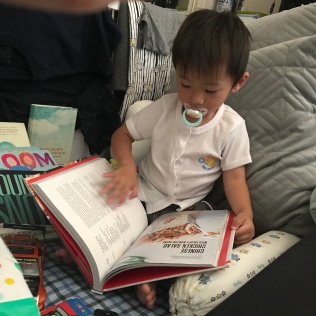 First and foremost, to the mummies or daddies who have travelled with your toddlers on long haul flights by yourselves.

This post is just going to touch on the most struggles I have traveling with Ayden which are mainly the flights. Everything else was manageable!

Since the hubs couldn’t take leave, I thought it would be a great adventure for Ayden and I to go back to Singapore and visit the fambam! I was looking at flight tickets and the cheapest direct flights was $1300 for Ayden and I. Maybe it was due to the Easter Holidays. Then, an idea struck maybe I can have a stopover in Seoul shop and see the cherry blossoms (since the husband is not a big fan!), well when else can I go to Seoul right? To my surprise, it only costed us $1100 from MEL – SIN(transit) – ICN – SIN – MEL on Singapore Airlines. I thought it was a great deal! So we booked it right away! 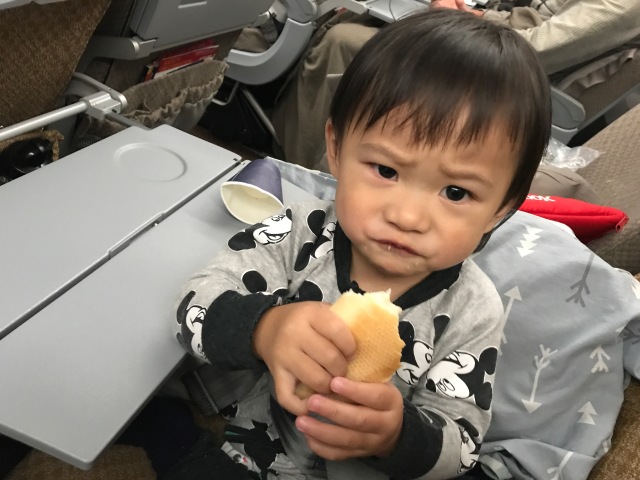 Weeks leading up to the travel date, I’ve become super nervous. I kept googling and pinteresting how parents deal with a toddler on long haul flights. Then I found out about a Quiet Book from a fellow mummy in my FB group. And I tried searching for it and realised how expensive it was. But I took it to the last minute, i cant even make it myself as we were running out of time and me working full time didn’t help either. So i went into Kidstuff at Westfield and ask if they sells them. Lucky me (i guess!) they have the last one in stock. My heart sank as the cashier kept my shiny $50 note into the register. 💸💸💸 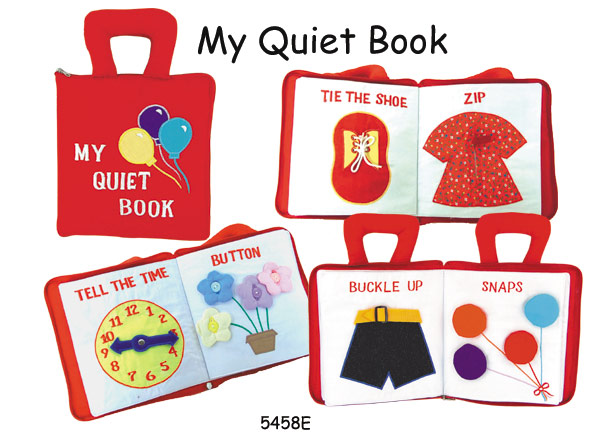 None of the major stores like Toys R Us, Target or KMart sells them! Booo. And i strongly urge mums to put together a Quiet book if you have time. There are even mother groups that creates quiet book together.

I found a great no sew Quiet book if any mums are interested! Well, in all honesty do we even have time to sew?
http://www.andnextcomesl.com/p/the-3-day-no-sew-quiet-book.html

Spoke to a handful of mums from various groups, many packed a whole cabin bag of toys and whatnots and snacks for their lil tots. But traveling on my own, I don’t even have the capacity to carry so many bags on top of this “heavy” and active toddler of mine!

Instead, I packed his Toddler Pack with heaps of snacks (yes Ayden is a big eater. If you have food, he’ll be right behind you!), a couple of play dough packs, an unused wallet with heaps of cards and zips, The Quiet Book, several sticker sheets and his favourite Peek A Boo book.”Boy that will suffice won’t it”, how wrong I was! You’ll read about it soon hehe

The Melissa And Doug book was given by a friend while we were in Singapore and it was super awesome! Ayden spends heaps of time on it on the flight back! You can find the whole range at Officeworks!

This Melissa & Doug On the Go Water Wow Book allows you to colour by painting with water. It features 4 reusable pages and a refillable water pen so you can continue drawing over and over again. 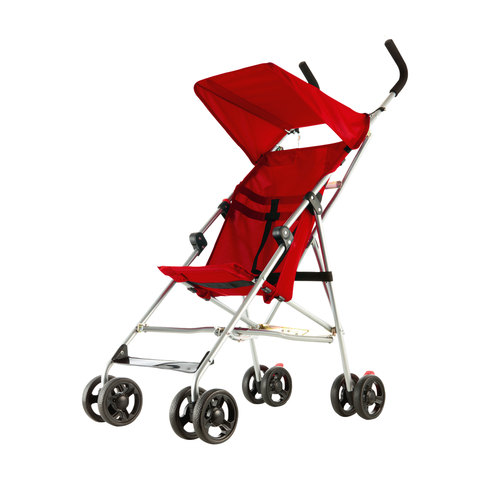 Additionally, Instead of bringing our BabyJogger, I bought a $20 Kmart stroller for the trip. I can’t risk them destroying my favourite stroller 😣! This umbrella stroller is super easy to fold and very light indeed. My mistake was not using this stroller all the way to the gate and instead I checked it in with our luggage. It could have saved me the energy of carrying Ayden all the way to the gate! As the day arrived,  my packed Herschel backpack was filled with milk powder, bottles. wet wipes,  diapers essentials, sweater, extra clothes and Ayden’s toddler pack and off we go to the airport!

As we got to the airport, we were given an aisle seat and we have a seat blocked for Ayden as all bassinet seats were taken. Yay! Although I must admit we knew this before hand as a kind soul Mama from our SG Mothers a Group pulled strings for us to get  extra seats where bassinet is unavailable. I thought i was being the smart mama and booked the evening flight to coincide with Ayden’s bedtime! Oh no no no! As we sat buckled in our seats praying that the third seat will be vacant, I looked around and prayed so hard that Ayden will be on his best behaviour. As the door shuts, I squealed knowing that we had the whole 2nd last row to ourselves! 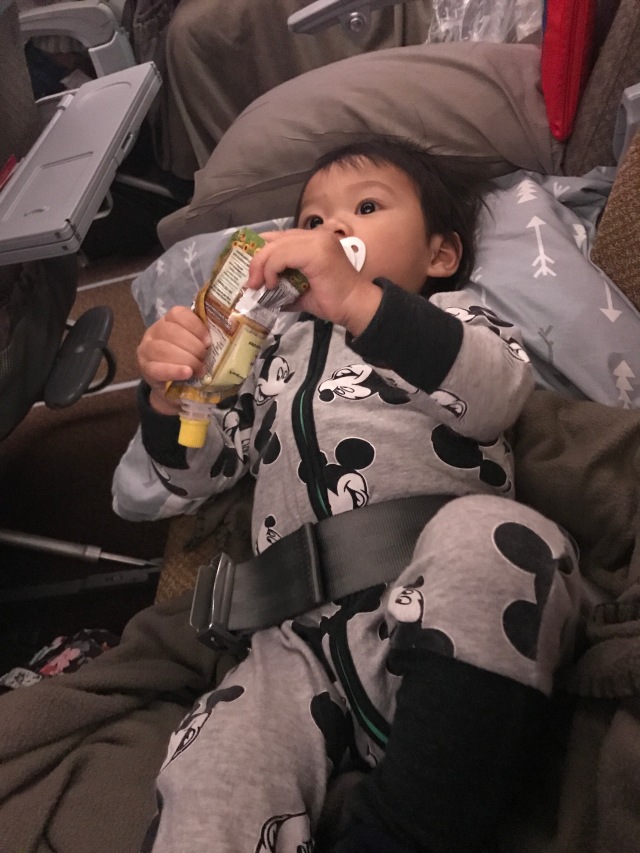 Ayden was just very curious with the lights; with the people around him, the remote, the screen, EVERYTHING! And nope he did not sleep until the last three hours to the flight! It was the hardest! I gave him toys, I let him watch videos of himself on my phone, snacks after snacks, played his play dough , flip his peekaboo books like a zillion times and even his quiet book didn’t last him at all. 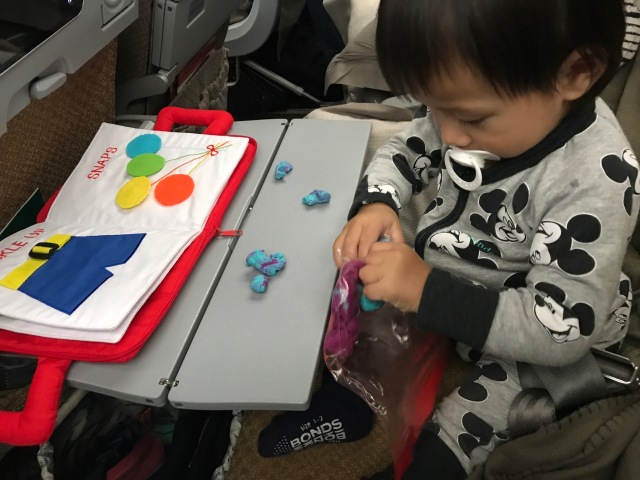 Then I muster up the courage to let him walk down the aisle, this was about 10PM AEST. Lights were dimmed and passengers were trying to tucked themselves to sleep. And this tiny little fingers decided it was fun to poke everyone sitting on the aisle as he happily strut down the aisle 😧 I scoop him up with such struggle and walked towards the back so he can walk around the galley which is a bad idea since it was busy! I was drained by this time!

He was overtired and overstimulated. He kept hitting the monitor hence the person in front of us got annoyed. Then finally an air stewardess came to assist and entertained him while I dash to the bathroom! He played with the crew for a while and then I decided yes it’s enough for him a warm bottle of milk and tucked him to bed! This was 3 hours before we landed!

2AM SGT, it was a 2hour transit before our flight to Seoul. I let him walk around and made sure he exhausted himself! True as it is as we board our Singapore to Seoul Flight, he just slept through almost till we landed in Seoul! 👏🏼 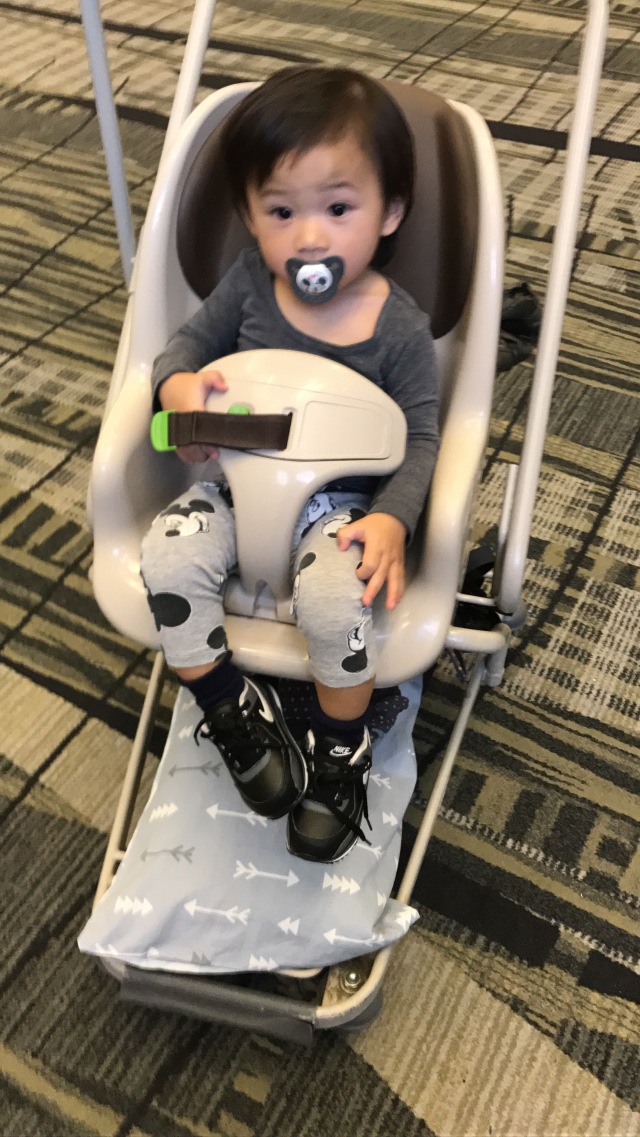 Our flight from Seoul to Singapore was at 9am in the Morning. We were seated at the Bassinet Seat right in front of the Galley which is a horror! It was super noisy with chattering, laughters, slamming of trays and trolley!  I knew right then it was going to be a very bad flight! So Ayden had trouble sleeping due to the noises so he played, eat and watch TV. And finally asleep on me almost 1/2 of the flight. But it was a tiring flight to have him on my for 3.5hours! But I rather that than him walking around. He even played with his friend in the next bassinet!

And finally our last sector back to Melbourne was a breeze. We were on the 7:45am flight. He slept as soon as breakfast were served and woke up playing with an older gentleman beside us. He was partially well behaved on the flight.  And nap again. It was great when we found out we actually landed 45mins earlier than expected! I wonder how we did that! 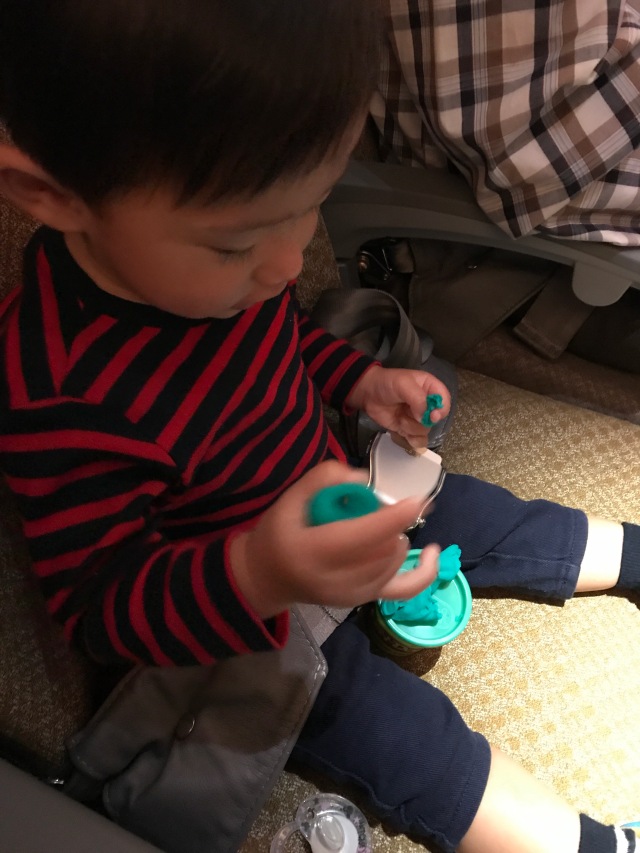 Not all flights were horrible but it was very unpredictable how Ayden turns out in every flight and circumstance. Distractions and patience are the key! Personally, I won’t travel by myself with a 15mth old toddler again. Maybe I’ll distract him with an iPad next time which we are not used to since he doesn’t get screen time at home. Maybe in the future I will when Ayden can talk and we both can understand each other. It’ll be heaps easier!