3 days left before we head home.

Started off the day with breakfast at iHop before sending the cousin off to the Airport! We head down to Hollywood Boulevard again to Madame Tussauds since we are in the area, purchased the tickets online prior as it is much cheaper than buying at the desk. We bought it 5 minutes before we entered! Quite last minute… i must say! 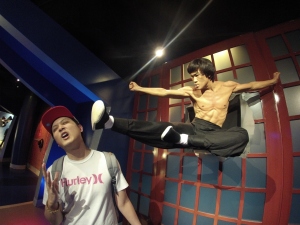 After doing some last minute shopping, we ended up catching Jim Carrey doing a Haircutting Stint for Jimmy Kimmel Live and also promoting his then new movie Dumb and Dumber To. Which was really cool to see him live! He was indeed aging but he’s still hilarious!

Across the road, there was a red carpet event so we end up at the front row to see what’s the fuss is all about! It was for a promotion for Fox Catcher! And Steve Carell was there and he was signing autograph right infront of us! Pretty disappointed that Channing Tatum didn’t show up tho! 😦

On the way back to Anaheim, we stopped by at the Citadel Factory Outlets in LA (5100 Citadel Drive), we shopped a bit (Well we gave ourselves 1 hour to shop!) before getting to Roscoe’s House of Chicken and Waffles for dinner! It was then the time to pack our luggage! 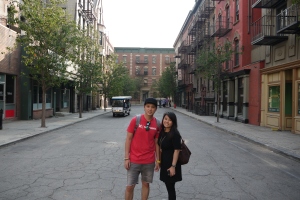 The next day we head out to do the Warner Brother’s Studio Tour, we got this last minute tickets through their website. If you’re any tv and movies lover, you’ll love this tour! We love the TV series ‘Friends’ so fair enough we love being on the set! It was great! We get to go to different talk show sets, i love being on the set of Ellen, although we can never get tickets for the show! They also had the new Batman memorabilia exhibition, everything from the first Batman movie to the last one! So the husband was in awe!

We headed to the Lakers game after! It was amazing, got to see Kobe and Jeremy in real life! The atmosphere was great! Spotted Rebel Wilson on the courtside and heard rumours that Fabulous was there too! Definitely a must do when you’re in LA! 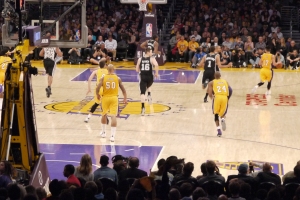 Our last day in LA, we’ve decided to do a last minute shopping at Walmart in Anaheim before I spotted the gigantic Forever 21 Outlet! But it was too late to get more stuff as our luggage are all packed up! Booooo! Right after we bought the essentials, we did do a bit of celebrity spotting in Malibu. Malibu Country Mart to be precise!

Trying not to be touristy! We spotted Kourtney Kadarshian and Scott! I am not really a big fan but it was nice to see them in person. We take the day nice and slow strolling around Malibu and cruising down the highway. It was a perfect day!

Before we head to the airport, we went to Churros Calientes for the greatly reviewed Spanish desserts. If you’re in Santa Monica, don’t miss this! You definitely have to try the Churros here! Don’t bother buying the churros at the Pier as its not worth it and doesn’t even taste good at all! The café is pretty small hence seats are limited! We came here about 6ish and the place is slowly filling up. The café owner was so friendly and very accommodating. The atmosphere was awesome! If you’re not really all into chocolate, stick to the churros as the Hot chocolate can be quite thick and rich! Will highly recommend any travellers going to Santa Monica!

After living out of a luggage for 3 weeks, I was actually ready to come home. Till next time US!